If you have kids, then you know your pool is not a place for relaxing. It’s a place for jumping, splashing, diving, and most importantly for competition. If the usual stand-by games just aren’t keeping your swimmers satisfied this summer (regardless of their actual age), then you might want to try introducing a few of these pool games the next time you need to channel all that energy into a single activity. 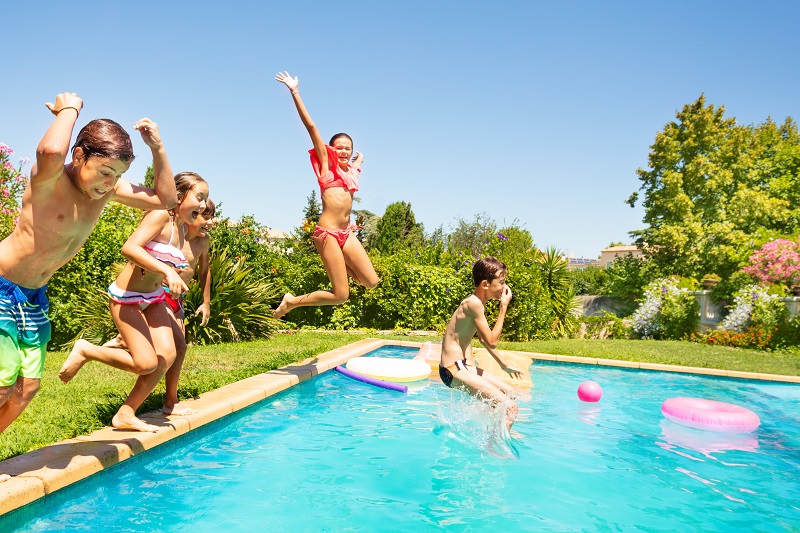 This game takes a bit to set up, but as Feeding My Kid shows, it’s got the potential to be quite a lot of fun. You’re going to need some plastic cups (preferably of red Solo variety), some string, and some squirt guns. You punch small holes in the cups, and run one string through each. You tie off each string at the end of the pool, making sure the cups hang above the water, and that they’ll move along the string with relatively little encouragement. Then you set up the competitors at one end of the pool with squirt guns. Once the signal is given to start, each starts trying to blast their cup down the string first, and whoever reaches the end fastest is the winner!

Tag is a classic game, and like all classic land games it’s a lot harder in the water. Shark (or Shark in The Pool to give its full name) is a variation that ups the stakes, and changes some of the traditional rules to keep things interesting. The way it works, according to Babble, is that one person is declared the shark (or “it” in tag terms). The shark chases down other people, and if they manage to make the tag then the new person becomes the shark. What makes this game unique is that all the non-sharks can get out of the pool. For five seconds at a time, anyway. This makes the chase less predictable, and the game lasts a trifle longer.

If you’ve ever played Whack-a-Mole in an arcade, then you already know how this game works. According to Moritz Fine Designs, one player gets a pool noodle, and the others try to avoid being bapped with it when they come up for a breath of air. Once all the bobbing heads have been bopped out, it’s time for someone else to take the noodle, and a new round to get started.

If you have a lot of pool noodles floating around (so to speak), then you might have all the materials or a full-on pool noodle raft race according to Medallion Energy. This game takes place in two parts (though theoretically you could skip the first part if you have rafts from previous sessions already made). First, each team (or player if you only have individuals) gets between 10 and 20 pool noodles, as well as some duct tape. If the tape is waterproof, so much the better. Each team builds their own pool noodle raft (and you can add a ticking clock factor by limiting the amount of time they have to design, bundle, and tape their creation). Once the rafts have been made, they’re put into the pool. One member of the team gets on the raft, and on the signal they have to try to reach the other end of the pool first (or navigate an obstacle course, for an extra difficult round of this game).

During the race, if someone falls off their raft, they have to go back to the beginning to start over. And, of course, if a raft falls apart then that round can be comfortably declared over.

For more tips and tricks to keep your summer going strong, simply contact us today!

At Varsity Pools & Patios, quality means longevity, efficiency, performance, and craftsmanship running right alongside beauty. We stand behind each project to the fullest. Learn More

Please feel free to contact Varsity Pools by phone or email, and we will contact you as soon as possible.

Scroll back to top